6 Popular NFT Use Cases Across Industries

The areas touched by NFTs, which have not lost their popularity since the day they entered our lives, are increasing. Today, it is safe to say that NFT technology is at a point where it exceeds its original purpose.

In fact, owning an NFT may turn out to be something useful that yields utility other than being a significant investment that you can brag about. At this point, you may be thinking about how they do it. Let's examine the different NFT use cases across industries in this blog post.

The Metaverse and Money report by Citi GPS focused on popular cases where NFT technology is directly linked. According to the report, we come across NFTs in two fundamentally different categories: beneficiaries and collections. So, how will the developments shaped under these main headings shape the future? 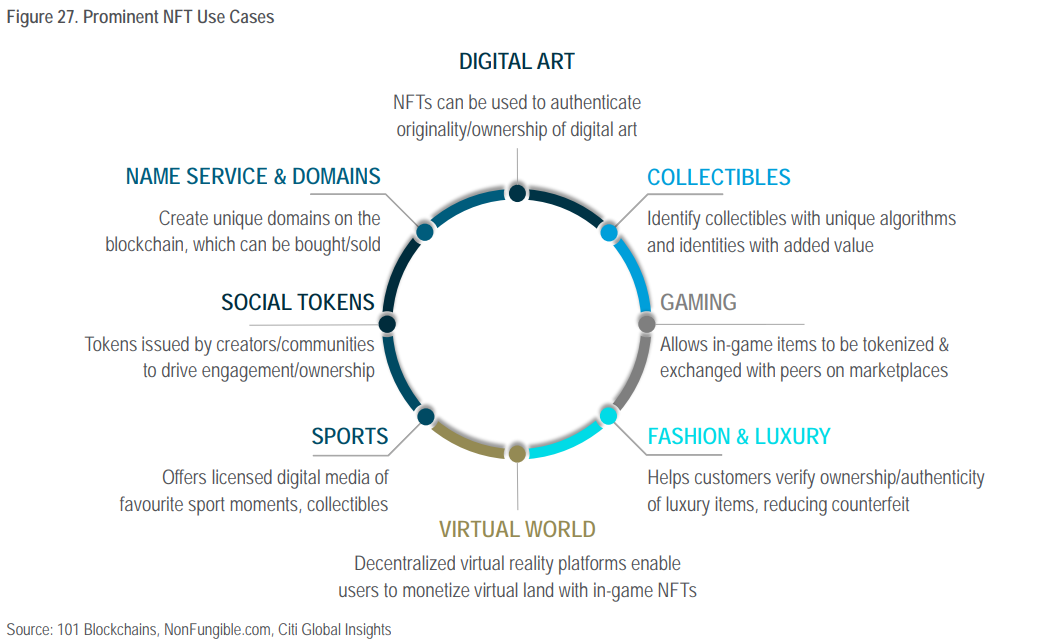 Stamp collecting was pretty cool back in the day. However, probably none of us thought of our stamp collections as an investment strategy. Rather, our own pleasure was in the foreground.

Owning an NFT artifact from a valuable collection is much more than purchasing a JPEG file. Digital artworks, which provide many benefits to both the creator and the buyer, also caused a transformation in the understanding of art that we are familiar with. So much so that we cannot say that everything we see on the internet and marketed with the label of 'art' appeals to our aesthetic perception. But on paper, it amounts to much more than we imagine, mostly on the material level.

NFTs for art exploded into the mainstream in March 2021, with the sale of the digital artwork Everydays: The First 5000 Days by digital artist Mike Winkelmann, popularly known as Beeple, for $69 million at Christie’s. Famous artist Monet's painting Nymphéas was sold for 15 million less in 2014.

It is possible to say that NFT technology, which allows collectors to claim rights on an artwork thanks to digital ownership, also protects the rights of artists. Contrary to the returns of the physical art world today, artists can continue to receive a share of the sales after their NFT works are sold. Artists who want to escape the narrow limits set by auction houses and benefit from the blessings of the Blockchain universe leave themselves to the safe arms of digital production.

We can even say that the digital state of art encouraged even those who did not make a living from art a few years ago. It is possible to see different artists and creative works every day while browsing the internet.

Here are some examples of how "JPEGs" can actually create value and build communities:

Anyone who realizes that they can turn the hours they set aside for enjoyment into income, turns to play-to-earn (P2E) games. Of course, NFT technology also has a large share in the rightful rise of interest in the gaming industry. The pay-to-play (P2P) model, which requires payment to access customized details in traditional games, is being replaced by a universe of opportunities where digital ownership can be transferred to the real world. Sometimes an object in NFT format earned in-game, a pet, or even a character trait can be turned into profit for users.

Although a large section of the traditional gaming community is resistant to microtransactions and blockchain adoption in what they see as usurping of “gaming for fun” by the introduction of a for-profit motive, 2021 witnessed over $4.5 billion of gaming-related NFT trading volume.

The popularity of GameFi and NFT gaming concepts has enabled visionary start-ups to come a long way in a short time. So much so that the startups, which are seen as the “newbies” in the sector, gained a value of 100 million and above in less than a few months. Of course, the increase in players following the benefits offered by Blockchain and NFT technology to the players is a determining factor in this valuation. While playing Football Manager, you may care enough to wear a suit, but once you start selling the NFT of a player within the team, things can start to get interesting…

When it comes to both visuality and high marketability, the Fashion and Luxury category is among the main areas that technology can easily shape. While we frequently talk about the impact of AR and VR technologies on the fashion and eCommerce industries, it is useful not to miss the innovations that Blockchain has brought to these areas. The world of Fashion and Luxury, which will be one of the main elements of the metaverse that we will build with our own hands, makes great use of NFTs.

Otherwise, without ownership, it is difficult to persuade people to buy digital clothes that they cannot easily use in the real world. So, we can say that brands reflect the power of technology very well in the same way. 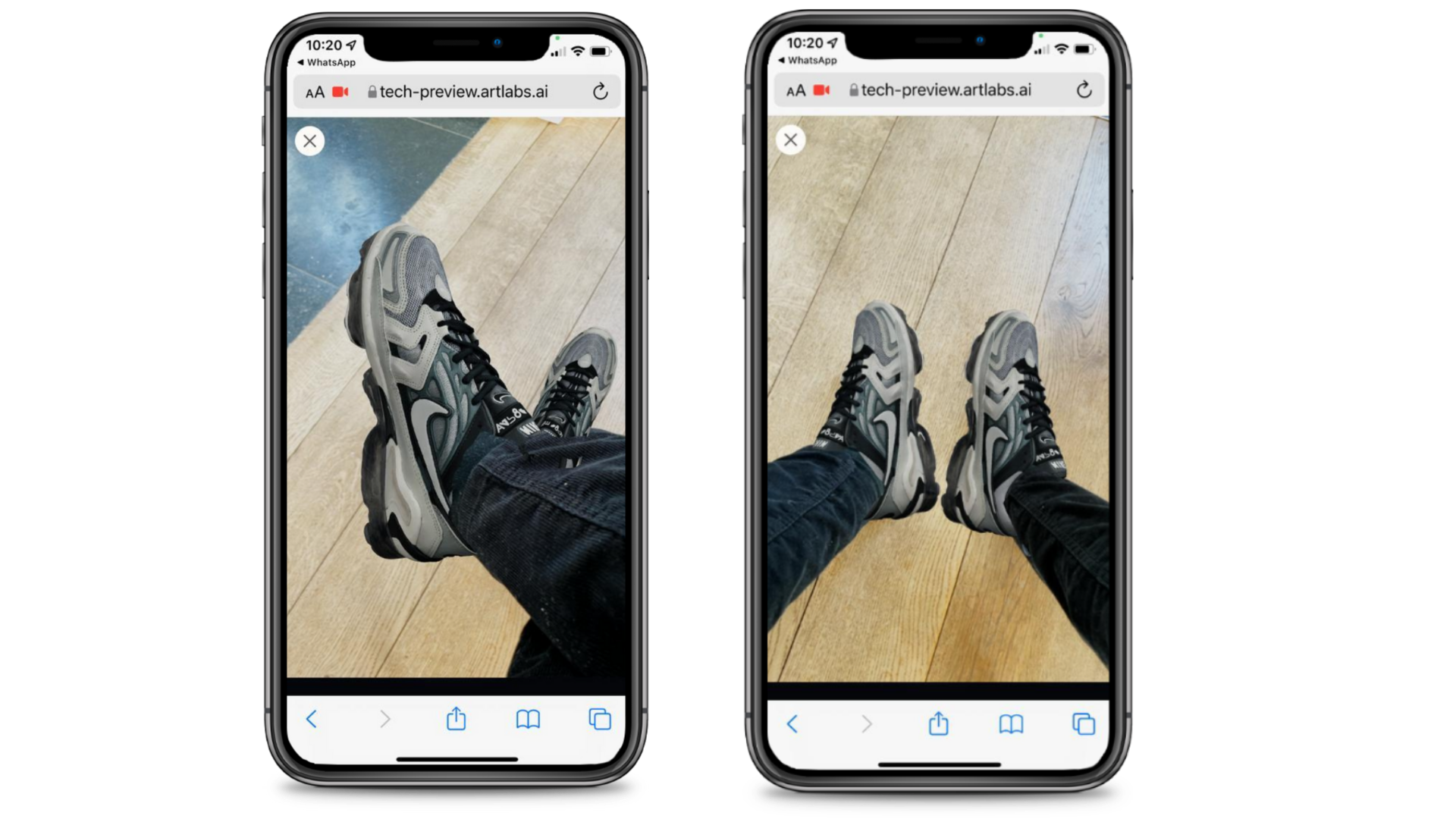 Let's take a look at the NFT moves made by the brands for the metaverse:

As we mentioned in the first use case “Digital Art & Collections”, NFTs are used as a tool to create a community in the fashion and luxury category. NFT touches embedded in marketing moves invite users to a more personalized high-tech experience that matched the energy of the luxury industry.

The possibility of having the digital twin of a physical product in the metaverse, and even the fact that these products provide various benefits such as participation in special events, can be listed as different use cases that will keep buyers’ interest alive.

“The coastline of Kadıköy was completely taken over in the Metaverse. Should we look for something from the European Side?"

Although it may seem like an empty futuristic return, the phrase “buying land in the metaverse” may not be as unreasonable as it seems. We have witnessed the virtual land ownership frenzy on platforms such as Sandbox and Decentraland.

The year 2021 witnessed a virtual land rush, with leading platforms (e.g., The Sandbox, Decentraland, Cryptovoxels, and Somnium Space) selling over $100 million worth of virtual land in just one week in November 2021, with over $86 million of it coming from The Sandbox.

These platforms, on which you can buy decentralized land parcels developed with Blockchain infrastructure, have an important place in the future of digital ownership. We have given an example for Istanbul, but with the rise of digital real estate, not only big cities but also many other imaginary worlds are going to create different opportunities for their owners.

Activities like betting aside, most viewers see sports as a special time to enjoy. However, would the universality of the sport be tarnished if the NFTs of the top 100 goals or game-changing last-minute baskets were to be sold?

Sports NFTs caught the collective attention of fans with NBA Top Shots NFTs, launched in late 2020, by the NBA in partnership with Dapper Labs (of CryptoKitties fame), clocking in over $700 million in sales in less than a year of launch.

Sports NFTs are best explained by player cards from childhood. Sometimes owning certain cards would affect social status in games. Or the cards would change hands frequently, such as by bartering or fighting. Just like those player cards, various details about the team and the game, such as important moments in the sports world, and special clips can be marketed with NFT technology.

According to Deloitte Global, the global sports NFT sector will generate over $2 billion in transactions in 2022, with an estimated four to five million sports fans globally having purchased or been gifted a sports collectible NFT. Limited edition video clips of sporting moments or player cards are likely to be the most popular assets in this space.

Can sports that are filled with stories from the start to the end, especially football and basketball, lose their sincerity in the eyes of the audience when they are sold piecemeal?

Every community needs a foothold. And social tokens can be considered a pillar of a community-powered blockchain world. These tokens provide various advantages to both their creators and their owners.

Social tokens can be used in different ways, such as creating and rewarding fan communities and being self-rewarding for creative work. They can be purchased by community members and offer various customized benefits within the community’s own economy. Or they can be distributed by the creator to reward the loyalty of loyal members. All of them basically have similar features to the opportunities offered by the NFTs we mentioned and open the door to a privileged world for their owners.

Celebrity artists and athletes like rapper Lil Yachty, and Grammy-award-winning musician RAC have introduced tokens to give fans a stake in their work. The $RAC tokens were not purchasable but only earned retroactively by the most loyal subscribers.

Act Now To Take Part in This Digital Ownership Trend

The world of technology is an open-ended field just like this topic. It is likely that NFTs will come in many different forms than we mentioned in the future. We can't predict what kind of developments will happen, but we always keep our foresight open for innovations in the technology ecosystem. Take a step today and contact our professional team to make the most of the benefits of this digital ownership trend starting with digitizing your products.

READ MORE
Opening the Door to Augmented Reality for eCommerce
5 Game Changer 3D & AR Shopping Apps
3D & AR in Fashion & How To Leverage 3D Visualization | artlabs
Metaverse 101: What It Is & Why You Should Care
Stay In The Loop
Subscribe To Our Newsletter