From Meta to Apple: AR Strategies of Big Tech Companies

Here we will talk about the top augmented reality companies in the world:

Augmented reality technology, which is not new but shines with the increase of big tech giants' initiatives, improves its applicability areas every day. Although there is a widespread perception that the purpose of its emergence is for entertainment purposes, the numbers for today do not say so at all.

According to the data from Statista, there are 810 million mobile AR users worldwide as of 2021. Also, it is predicted that orders for AR headsets will exceed 30 million by the end of 2023, and 1.73 billion users will actively use this technology in 2024. Sounds like a great time for brands to set their AR strategies, right?

The lion's share in these figures is the commercial sector. While augmented reality sets the gold standard in the field of eCommerce, it offers both companies and users a highly efficient shopping experience. Today, the number of frequent AR users is growing by taking the wind of big tech companies supporting this technology.

From Meta to Apple: Here is the list of top augmented reality companies

Google, one of the main companies that prefer to invest in wearable technologies, is working on smart glasses improvements. When the idea for the Google Glass Explorer Edition was first launched in 2013, it was leading the way as the first technology company to invest in this space.

However, the first Google Glass did not achieve the expected success mainly due to its cost and not being handy for daily use. Google then paused the project and relaunched it with an improved model and higher reach. However, Google Glass Enterprise Edition 2, appeals to businesses, rather than individual users.

On the other hand, Google acquired North, a company focused on creating augmented reality glasses. Launching their AR glasses called Focals 1.0 in January 2019, North paired the glasses with phones to display information, provide directions, and perform any action that could be performed via Bluetooth.

Images were projected in front of the user with the help of the lasers located on Focals 1.0. We can assume that Google wants to be more visible in the field of augmented reality, and wants to get North's technical experience for the hardware part.

In addition to the wearable AR glasses it has developed, Google does not neglect AR accessibility for its existing smart devices. Google Search and Google Maps have been developed with ARCore. ARCore works in harmony with both of these platforms.

When it comes to Microsoft's work on augmented reality, the first product that comes to mind is HoloLens. Launched in 2016, the first HoloLens enhanced our visual experience with high-resolution holograms, integrating parts of the virtual world into the environment we live in.

Even in this state, HoloLens offered a display beyond its age. However, the interest of other big tech companies in this area forced Microsoft to keep up with the latest developments. HoloLens, which we can call baby steps in Microsoft's augmented reality world, was upgraded and later launched as HoloLens 2. With HoloLens 2, Microsoft increased the user's field of view from 32 degrees to 54 degrees, thus making the line between virtual and real even thinner. Unlike the first model, this advanced mixed reality headset was designed for its corporate customers only. (The first HoloLens can be used in the gaming industry as well.) It focuses on increasing business efficiency, especially in manufacturing, healthcare, and retail services. 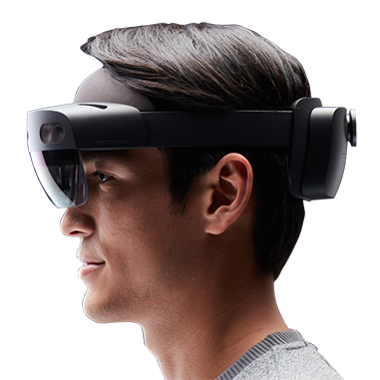 Mesh for Teams, which was recently announced by Microsoft and will be available as of 2022, is being developed to take online meetings to a different level. Although the difficult times of the pandemic made it necessary to carry out business activities remotely, we can say that it accelerated the introduction of developments that will eventually occur in our lives.

As Mesh for Teams "beams" people from different locations into a room with holographic images, it will also be accessible on many devices, from smartphones to mixed reality headsets.

Microsoft, like Google, did not hesitate to seek technical help in other areas. By purchasing AltspaceVR, a social network for virtual reality, they made it clear they want to be a key player in both AR and VR spaces in near future. Companies should definitely keep an eye out for Microsoft's next metaverse move.

Amazon also joined the latest AR trend to not fall behind in the competition, but not by launching AR glasses. The company came up with smart glasses called Echo Frames, however, it is not possible to define Echo Frames as AR glasses since they lack the complete visual experience. We can call these glasses a kind of closer and more functional version of Alexa to your ear. By pairing Echo Frames with your Android device, you can access your notifications, make calls, or perform any audio activity you would normally do with your phone.

All notifications are filtered by your loyal assistant Alexa and reach you in order of importance. Notifications that are not urgent or considered unimportant by the virtual assistant are left so you can check them later on your smartphone. It's as easy as relying on your assistant's prioritization system in real life, right?

Although Amazon is not heavily investing in smart glasses (as far as we know), it benefits from the blessings of AR technology for customer satisfaction in its applications. Amazon's online app allows you to try the products in the comfort of your home with the help of AR to make sure everything goes smoothly with your orders. Using AR in eCommerce is known to increase conversion rates and decrease product returns, so we can say an eCommerce giant like Amazon is trying everything to improve its online customer experience.

Claiming that it will turn into a metaverse company in the next 10 years, Meta/Facebook is one of the most relevant companies in the augmented reality area at the moment. With successive initiatives, Meta/Facebook is working hard to improve user experience and become a leader in the industry.

AR will play a key role in Facebook's metaverse transformation. However, its latest smart glasses in collaboration with Ray-Ban are not technically AR glasses. They do not have a screen and do not offer augmented reality displays, like Amazon's Echo Frames.

Announced at the Facebook Connect event and referred to as "Project Nazare", these new glasses offer a very different universe experience than bringing virtual elements to the real world.

One of the most important reasons why this project promises a different perspective and enhanced experience is Zuckerberg’s goal of "breaking the addiction to phone screens". It is claimed that the smart glasses, which are planned to work with their own virtual screens without the need for any physical intermediary object, will not disconnect people from the real world, but in fact, will connect them more to life.

Until now, Apple has been as silent as Amazon in developing AR devices. It focuses on making existing devices as compatible with AR as possible with the improvements in its smart devices. The LiDAR sensors, which were unveiled with the iPhone 12 Pro model, are the biggest proof of this. Working with the 3D laser recognition technique, LiDAR measures the depth perception in the environment by detecting the distance of objects or surfaces. Working together with the camera, this technology increases the usability of AR applications.

Although there is no concrete product yet, there has been a talk about AR glasses to be developed by Apple for a while. Even though we keep hearing some news about these smart glasses every day, we can say that most of their design or features are just rumors for now. Will Apple finally be the company that achieves the mass adoption of AR glasses? We will wait and see.

What is “your” Augmented Reality Strategy?

Learning from the big augmented reality companies that dominate the developments in the technology world may be the most strategic step for the future. Some of them are already advancing their AR strategies and some do not hesitate to get the support of an expert when necessary. If you haven't taken a step to include AR solutions into your business plan, maybe the Big Five's AR strategies can inspire you.

If you want to display your products in 3D for your eCommerce business where visuality is of great importance, you can contact us and learn more about our solutions.